while waiting for the election returns, i was on the phone with katie, and i asked her, "after obama wins the election, do you think people are gonna take to the streets?" i was imagining the next day, people marching and dancing downtown, and katie agreed that they would. but it happened much sooner than that - see below: 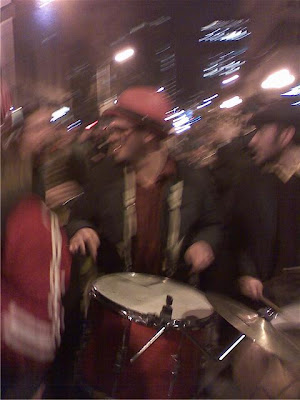 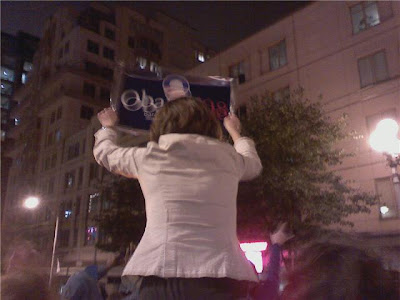 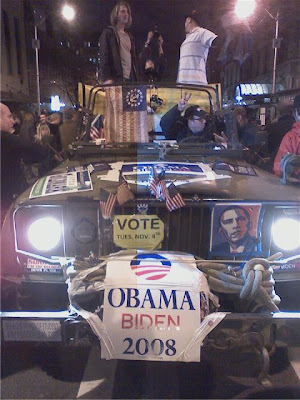 thousands of people took to the streets to celebrate. i've never seen such a diverse crowd having that much fun together - kinda like when the mariners won those 116 games back in 2001, only this time people celebrated something way more important. a drum circle formed and the crowd chanted, "obama!" and "yes we can!" and a full-on 10-piece (more or less) brass band showed up, filing into the crowd from some side street with their horns blazing.
we marched from pike place market (probably 2000 of us) down to pioneer square - then back again. then, unsure of what to do next, we marched back to pioneer square and did the the whole thing all over again. i received numerous handshakes, high fives, fist bumps, smiles and even some hugs - all part of the celebratory feeling.

this kinda thing only happens once in american history, and its a good feeling to be on the right side of history.
Posted by jrm at 4:33 PM

wish i was there celebrating. we were at home watching everyone celebrate. we felt we were there with them. it was such a great time!

WOOOOOO! Did you get any chest bumps too? (ala jock football dudes)

I envisioned the brass band in their traditional fancy outfits. The hipster boys are way cuter though..

i think all the football player types (still tryin to capture their glory daze while sittin in fronta the tv with a 6-pack (of beer)) musta voted for palin, cause i didn't see none of em.

and the brass band- well, look for them on youtube- not too much traditional, but not too hipster either. somewhere in the middle i guess.