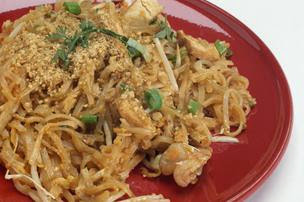 the seattle times just published a couple of pieces about thai restaurants in seattle.

here are the links: Thai food more popular than pizza in Seattle

this above article is written as if this is something to celebrate: we won the prize yall! the most thai restaurants of any city in the usa! woo hooo!

this above article tries to sort through the confusion by naming the best thai restaurants in seattle... and it proceeds to name almost all of them.

this is my problem: thai restaurants are so much the same in seattle. there are very few that do anything original with their menus, and i tend to feel disappointed by my 4th or 5th bite of swimming rama. i can pretty much go into any thai restaurant and name off a dozen+ dishes, and they are guaranteed to serve them. (pad thai, pad see ew, pad khee mao, cashew chicken, tom kha kai, tom yum koung, papaya salad, larb... and then all the curries.) and then, the food tends to be too sweet and too bland. even when i ask for 5 stars, the food ends up being rather mild.

yes, you would think that thai people have only 20 or so dishes that they eat... ever. and it is frustrating because of how many thai restaurants there are here, and so it doesn't make sense that they would all be so similar in their offerings.

it's like one big giant chain. even fast food is more original - i mean, mcdoughs has the big mac and burger king has the whopper, and these sandwiches taste nothing alike. but a red curry from tup tim thai and a red curry from banh thai will be almost indistinguishable. i just wish we had one restaurant that attempted to do something original - like pok pok in portland.

this is why i mostly go to viengthong, the Lao restaurant in rainier valley. it's menu includes items you won't find anywhere else - except maybe at home. but i should probably check out the suggestions in the times article, and see what i might be missing. but for now i will continue to frequent viengthong.
Posted by jrm at 5:01 PM No comments: