by request: celebrity gossip (aka - my attempt to drive all of you away from my blog forever) 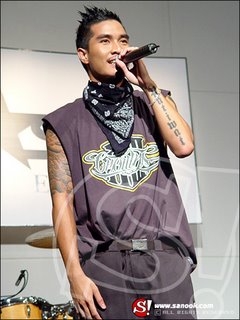 Clash's "Bank" sings up a storm:

(KPL) More than 500 Lao teenagers and adults were last night thrilled by Thai rock band Clash at the Lao-Thailand Friendship Concert, at the Lao International Trade Exhibition and Convention Centre (ITECC).Although several bands performed during the event, only one performer made Lao teenagers and adults alike swoon- Clash lead singer Bank, the Thai musician who works for the Grammy Company in Thailand. The concert was held in collaboration with the Vientiane Information and Culture Service and the Happy Entertainment Company as a way of strengthening the solidarity, love and friendship between the two nations. In addition, it also promoted popular Lao and Thai culture together, to display the skills of Thai performers and share ideas and experiences with local performers. This concert was also held to mark the upcoming Lao Uprising Day, the anniversary of which falls on 23 August next week. The Happy Entertainment Company was also proud to launch its new company for Vientiane residents, as announced by owner Mr Xayana-norasy Saynasisane, who said his company would focus efforts on open up the Lao entertainment market for outside visitors, in order to promote Lao music.While the concert and the Happy launched were both successful, there was however concern surrounding the number of young concert-goers who failed to follow the safety measures. This was due in part to the reduced numbers of police on duty this year, which caused a lowering of safety standards.At least one audience member expressed concern that such events should be properly policed.

bloggers comments: come over on saturday if you wanna sing karaoke to clash. (if you've come over for karaoke before, you've already sang to clash... you just didn't know it.) and who wrote this article anyway? i got lost somewhere in the middle when it started talking about "the happy."

more celebrity gossip to be forthcoming!
Posted by jrm at 6:48 PM

hmm, i think you may be successful in driving away readers. =) just kidding - i love my seattle friends' blogs even if they're about celebrities.

JRM, if you do sing karaoke on saturday will you please wear a baggy tank top with a belt?

oh wait, I was mocking his outfit, but now I see that the tank top is TUCKED IN to pants. I thought it was just a billowy tank top with a belt! my mistake.

FINALLY - some celebrity gossip! granted - i have no idea who this person is -but it's a step in the right direction. good job!