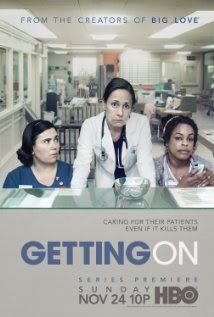 "Getting On" is based on a BBC show of the same name and is from the creators of "Big Love."  HBO aired it with little fanfare, and it was expected that it would play for one season and then disappear.  The first episode aired in December when absolutely no one is watching TV because we are all too busy eating something or buying ourselves presents.

Well, it unexpectedly has awarded it a second season.  (HBO seems to treat its dramas with a little more gentle hand; its comedies seem to get the axe with some frequency.  Both "Hello Ladies" and "Family Tree" were not given second seasons.  The highly-acclaimed show, "Enlightened," was cancelled after its second season, and only got that second season because HBO had a time gap to fill.  And by the way, "Enlightened" is amazing; Amy Jellicoe's eccentricities ring true, and she will undoubtedly remind you of at least one person in your life who you just don't want to be friends with.)

But back to "Getting On."  The show takes place in a geriatric ward of a hospital, and the pilot episode finds the lead characters trying to uncover the identity of a disoriented woman found wandering the streets of Long Beach CA.   (Hint: she is Southeast Asian.)  This scene alone makes the whole six episodes worth it. Take a look -